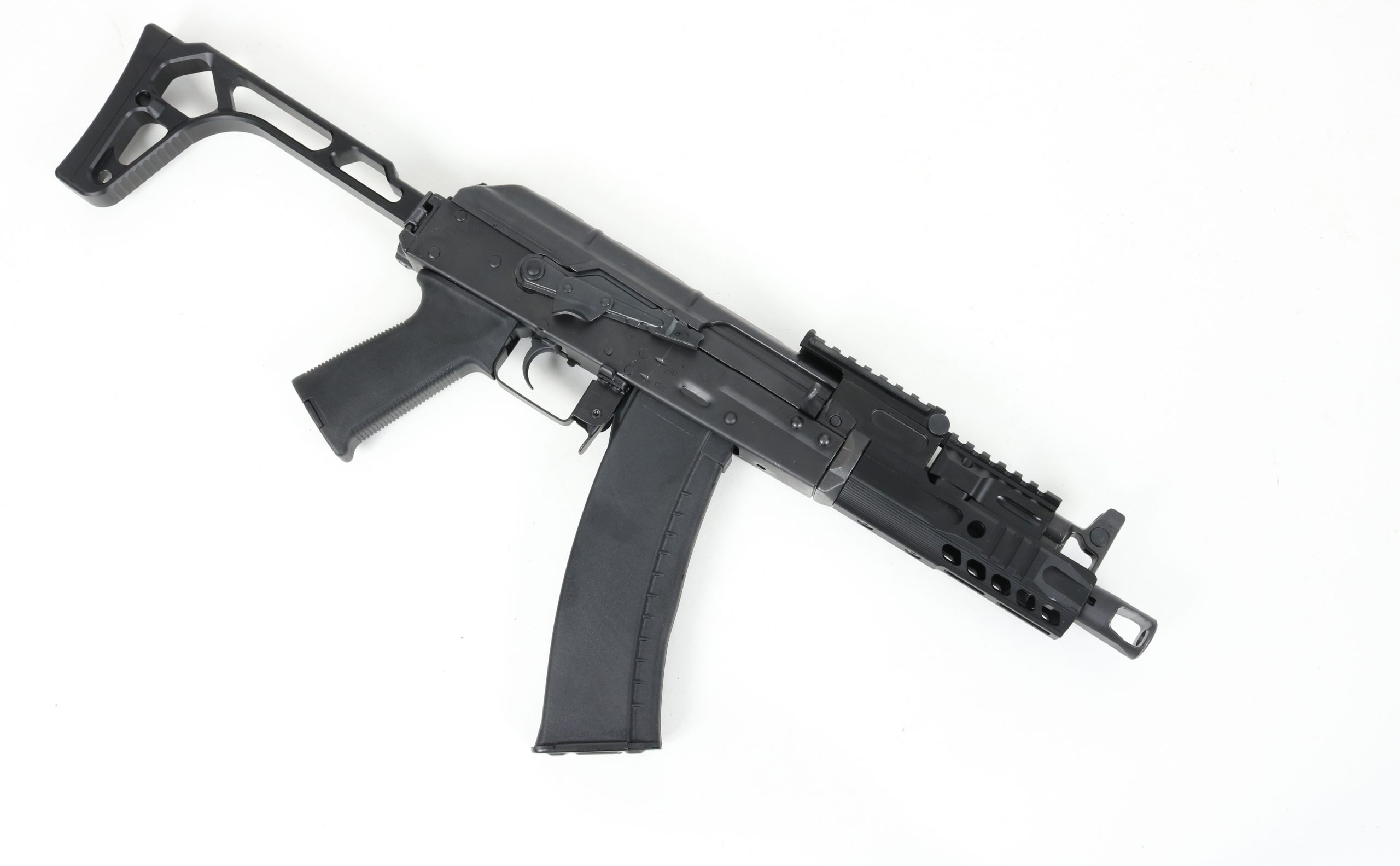 Not just another AK?

When you look at this,  a lot of people will think  “it’s just another AK”, and you can be forgiven for thinking that, but what you have here,  is in my mind one of the best AK’s to be added to the extensive range of great rifles from Arcturus. Since Arcturus made its entry into the Airsoft scene, they have continued to impress me with their approach, they have produced great looking and excellent performance replicas. Arcturus seems to be able to do things to their rifles that at first glance you can easily miss so you have to dig deeper into the working’s to truly understand what make’s them stand out from the crowd. So if you are looking for an AEG that’s a bit different with excellent reliability and impressive build quality? I might have just found what you’re looking for.

A pedigree to be proud of

When it comes to rifles of a particular pedigree, like the AK your thoughts are immediately drawn to that bad boy vibe, doing bad guy things.I’m sure that’s not how the great man himself would have wanted to see his AK used, but let’s face it the real world cost and availability drove the AK into the Bad boy’s hands all over the world. I’m pretty sure that was not the vision that  Mikhail Kalashnikov intended for his rifle. More and more variants of the AK are starting to change the view from a bad guy’s instrument of fear to the good guy’s choice for justice, just by changing how the AK looks and by offering lots of rail systems and lengths companies have changed the authenticity of this machine.Arcturus are definitely spoiling us for choice on the many options they have in their armoury,but I think I have found a diamond in the rough with this one, a real little trendsetter that will be right at home in any players armoury.

It’s not all about the length you know

This has to be the shortest AK I have had the chance to get my hands on! Now I usually like a shooter with a fair bit of length on the rail for my scopes and torches, but this has such a  small area of rail it keeps it neat and straightforward meaning when you are using it you can keep that tight, elegant stance while still being effective in any skirmish field battle.

Its small body surprisingly carries a fair bit of weight thanks in part to the good quality materials used in its construction, which for me is a sign of quality.

Call me old fashioned but for me, the weight of an AEG is everything and generally speaking the more weighty shooters just feel right, but also indicate a better build quality.

Look’s can be deceiving

When I first saw this small AK, my first thought was that it could only be used as a back up or secondary weapon but how wrong was I!   This tiny little shooter really opens your eye’s when you first use it and instantly put a smile on my face as it has a loud presence and a great feel as a little recoil rumbles through the frame, it really is a lot of fun.

Looks can really be deceiving and this has certainly won me over. I love it, the one thing that has given me a little more faith in the modern take on the AK is the way the newer rail systems are fixed to the body. Other brands I have tested fall fail and quite frankly are not up to standard as you usually get a lot of movement between the rear receiver and the rails, almost feeling like the rail has just been thrown on.Not this time, a good solid fit between the two sections has restored my reservations on adopting a truly classic shooter bringing it into the modern age of skirmishing.

It’s the small things that make the difference

Sometimes to see what separates what and what makes one brand stand out you have to look that little bit closer. The Arcturus AT-06 has some very defining features externally, with such a tiny front rail system they have still managed to make it their own. With a great looking flash hider that resembles the front of a tank barrel,  and a unique serial number on the side that ties it to the number of units actually built. The front rail is in two pieces and compared to another style I recently reviewed, it is held together with a very solid hex screw on either side. Now because it is so small at the front, you don’t get any play between the two halves of the rail system and when you have a tactical grip attached its reassuring to feel no give on the handguard. The rear receiver has followed suit in the strength department. The steel used is a high-grade composite and even has the small rivets on the body to replicate the real world version,  placed correctly, keeping up with Arcturus’s high standard’s. But they have also done a little work on the fake bolt window. Now as we know behind this window sit’s the hop unit adjuster arm, but usually, an AK replica has a tiny spring in a hole,  located just in front of this window to help cushion the metal rod that support’s the charging handle. This little belter as you will find out does not have that, what Arcturus have done is use a higher strength spring on the charging handle to compensate for taking away that horrible little spring and make opening the bolt window easy. The top battery compartment fits nicely under the overhanging rail from the front receiver and actually guides the cover in, no more annoying little catches or grooves to find to get the cover back on properly after you have placed a battery in. Now, the real eye catcher on this,  I’m sure you’ll agree is that fantastic looking stock. It may not be to everybody’s taste, and I’ll admit I didn’t like it at first, but it has soon grown on me. Just contemplating putting that in the shoulder made me do one of those silly faces you pull where you screw your nose up, but you know what, after using it I now believe it’s the perfect fit for this amazing little AK. Staying with the rear stock, this version was nearly cut from production due to the cost of the materials used on it, but I’m so glad Arcturus decided to keep it on the AT-06. Another fairly common trait with AK’s is that after a short while the fire selector will work it’s way loose, no matter what you do it will always be loose. Not on this, Arcturus use a  very stiff selector plate located on the outside of the gearbox and this is another win for me, it just seems more reliable, yes it will mark the outer paintwork after a short while but I would rather see lost paintwork than a lost screw and selector arm in the game area.

Simple and crisp, The perfect gearbox

Arcturus has made some subtle little changes on the gearbox too, so I have heard.  They have taken away two elements of the fire selector; usually these would join the main selector arm by using two steel triangular shaped plates in order to change the fire sequence inside the gearbox.  Alas, I cannot confirm because as much as I would like to, the boss won’t let me take it apart to see for myself, that’s possibly a good thing as I would get carried away and want to change thing’s if I think it needed it. But saying that Arcturus has given us a nice crisp gearbox with some impressive output so have they given us the perfect gearbox in the AT-06? I think they have. The AT-06 is a fantastic little shooter with power to match anything the Airsoft skirmish field can offer, Maybe more but one thing is for sure Arcturus is going to please a lot of players with this.

A little extra hidden away

Arcturus has given us a magazine style I genuinely hope to see become a standard from all manufacturers, a selectable ammo count. Yes, you read that right, Arcturus not only offer us two magazine types with the 550rd hi-cap and a mid-cap 120rd But hold on,  hidden away is a lovely little feature that I have not come across before. Now I’m not saying it hasn’t been done before I just haven’t seen it, but hidden away inside the mid-cap mag it has a switch that lets you change to a real cap 30rd mag for all the serious players. This is an amazing little feature if you ask me,  and a welcome addition to a new shooter straight out of the box I just hope that now Arcturus have let this ” out of the box” other manufacturers will follow suit.

So what do I make of the Arcturus AK-47 AT-06? Well, in short, it’s great. Small, compact but still enough power and performance to outdo a lot of standard, out of the box shooter’s. I am very impressed with Arcturus and the way they are approaching thing’s when it comes to adapting well known and trusted platform’s to make something their own and succeed where others have failed. Like I said early on in this review I have had the chance to try a fair few AK’s, but this is going to be one of those you always remember, whether it’s for the look’s or just how it handles.  I don’t really know, but one thing I do know is this is going to be very popular with AK fan’s so expect to see them rocking your nearest skirmish field soon.