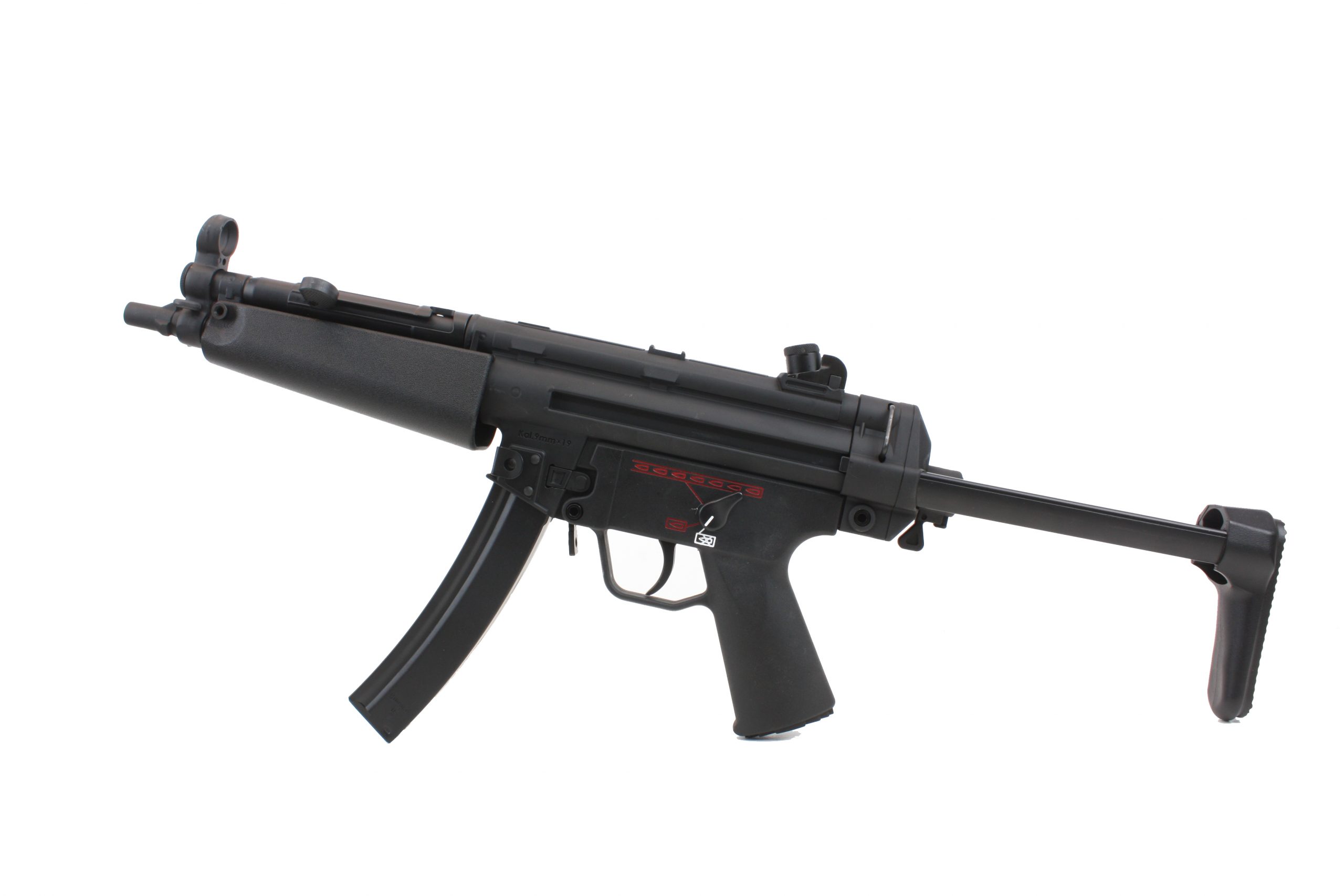 The sub Machine gun is one of the most widely used in the real world, having been adopted by 40 nations and numerous military, law enforcement, intelligence, and security organizations around the world. Its real world counterpart was designed and built in 1964, and later adopted by the German Federal Police. Since its conception, over 100 different variants have been created, including this one sitting on my bench right now

This AEG has been a popular but less common tool on the airsoft field, due to its compact size, simple design, and a version 2 gearbox which is easy to work on by the way, what’s not to like? Primarily seen on CQC biased sites, and often incorporated into an Old School Navy Seal load out in this issue. This AEG doesn’t appear to get much of a look-in when it comes to arid or woodland based skirmish fields, which are typically awash with far too common … multicam, M4’s, AK’s, It does hold a special place in my heart though, as it was the first AEG I used  whilst , setting up a zombie apocalypse experience many years ago. This rifle prompted me to seek further afield for skirmish sites, taught me my craft, and affirmed my love of this hobby. So let’s begin…

The ICS MX5 A5 sits on the budget end of the market, so already I have to look at this with unbiased eyes, and take value for money into account. Aesthetically speaking, there is very little to shout about in terms of appearance. From top to bottom this AEG is flat-black in colour, and the only tonal differences come from the different materials used. The upper receiver is metal, while the lower receiver and hand guard is polymer, with the hand guard having a slightly rougher surface for that slightly added grip. The retractable butt stock can be located to one of three positions; either completely retracted, half way, or fully extended which for sits quite nicely and feels comfortable. The arms of the stock are metal, and the shoulder pad is a very rigid polymer with a serrated surface, so that it won’t slip from the shoulder. The stock assembly appears rigid enough, but I would like to point out that the plastic shroud that keeps the stock in position is not the strongest and rough use or an unexpected fall could see this to be the first failure point

On the whole I thought it was a good looking piece of kit. Sling mounts are found in 3 positions down the left hand side, front, back and middle, which is great as you can use it with a variety of sling setups, however it’s not geared up for the left handed shooter. This model comes with iron sites, with the front site being a hooded post, and the rear being a rotary drum, with four different positions that will change the viewable sight picture.

The fire selector is nice and large, as well as being ambidextrous, however, on the model I have in front of me, when moving between safe, semi, and full auto, it was devoid of that little click that lets you know you moved it to the right setting. That feedback in my opinion is quite important, without it, you may end up taking your eyes off the target to check, or worse, burst into a room with your blaster on the wrong setting. This was a little disappointing, but nothing to get triggered about. No pun intended! The redeeming factor for me was the hop access, which at first I thought was going to be a problem because I couldn’t find it. As it turns out the cocking lever does absolutely nothing in terms of revealing a hop unit, and serves purely to satisfy the inner child in us. The hop is actually altered via a small lever, which pokes out from the top of the hand guard, near the middle of this blaster. Now this I really liked! The front hand guard is easily removed via a single pin at the front, which can be removed by hand. This where the battery is housed, but unfortunately there’s not a huge amount of space. When testing, I normally use a 7.4 volt lipo, which fit into the front hand guard quite nicely, but you may struggle with larger capacity battery packs, so I would stick with the batteries recommended by ICS such as an 8.4 NiMH 1600mAh, or use a 7.4 volt lipo due to their smaller size. Replacing the hand guard was a little tricky, as again there is no positive location, but I imagine this will become second nature with practice. In summary, my only two quibbles were the plastic shroud that holds the rear stock in place, and the fire selector which felt numb, but apart from those issues I was happily satisfied with everything else.

Under the hood sits a regular version 2 gearbox, and by regular, I mean that once again there is nothing here that stands out from the crowd. Access to the gearbox is fairly simple, with the removal of less screws than the average M4. The cylinder is brass and ported, which it would be due to the length of the inner barrel. The gears trigger assembly, and all of the air sealing components are just standard, with the cylinder head, piston, and trigger block assembly being constructed from nylon. The air seal between the piston head and the nozzle was actually very good, and something I’ve witnessed in almost all ICS rifles I’ve owned or handled. One thing I must point out though is that the ICS nozzle is proprietary, as is the hopup unit, something I have fallen foul of in years gone by when trying to improve my home collection. The ICS hopup unit and nozzle work perfectly well together, and after-market components do not fit without modification, be warned! The one part I did like was the motor, which as a Turbo 3000, a motor which ICS appear to use in many of their rifles, and performs well with the demand for both torque and speed.

There was nothing impressive about the internals, but then going back to my original comment, I never expected anything more than what I found with this sitting at its current price point. Although the nozzle and hopup assembly are proprietary, the other components such as gears, trigger block, piston, and cylinder parts are not, meaning some fairly simple upgrades could be performed to turn this into a well-oiled death machine. Being a version 2 gearbox, options such as an electronic trigger and mosfet assembly are also viable options.

Leading on from what I’ve seen in the gearbox, I wasn’t expecting miracles. I opted for the 7.4 volt lipo to get the most that I could from the gearbox and motor. The trigger response was average, and the rate of fire was ok. The one thing I didn’t like was the noise produced by the gearbox, which to be fair, sounded a little screechy. It was actually a little shocking, I couldn’t believe how loud it was, and it’s not something I’ve run into with other rifles from ICS. I want to put this down to a one-off, but in the interest of being fair I have to review what’s in front of me with unbiased eyes.

Setting aside the noises emulating from the gearbox, I ran it through the chrono to see how she performed. It was pleasantly surprising, and performed pretty consistently, running at an average of 324 feet per second over 20 shots, and with no more than a variance of 3 feet per second each way. This then is great for the CQB skirmishers who need a reliable piece of kit that sits under the 330 mark, and is very unlikely to randomly stray over that threshold. I decided to test this on the 25 meter range, as this would typically cover the distances found at most CQB based sites. I have to say I was surprised yet again, and with zero modifications this rifle performed well. Shooting at an A4 sized target, and with the rifle locked into a vice, it achieved a 3.5” grouping with 10 shots on semi-automatic. For this test I used 0.2 gram BB’s, as this was an indoor range and at close distance. Before finishing, I ran with 0.25’s, just to see if the hopup coped with them okay. Not that using 0.25’s is considered demanding, I’m pleased to announce that the hopup performed perfectly well.

Okay, so there’s a couple of wobbles, the shot-to-shot response feels a little laboured, and the noise from the gearbox was hardly desirable, BUT, for not very much money you are getting a small, compact workhorse, with tonnes of potential. Speaking in terms of after-market upgrades, an RHop, faster ratio gears, shimming, and an upgraded piston are fairly cheap and easy to install, and would instantly take this rifle to the next level, with the biggest improvement probably being the installation of a mosfet. Without these upgrades however, you are essentially buying a cheap AEG, and unfortunately you will get exactly what you pay for, so if the thought of buying a rifle that needs work straight from the box doesn’t sit well with you, then the ICS may not be your best choice. I like the fact the rifle comes with two magazines as standard, and that the bulk of the rifle is actually quite rigid. I like the iron sights, the compact size, and the accessibility and performance of the hopup. All in all, if I were to skirmish at a CQB site as much as I would like to, I would definitely be up for the challenge of taking this rifle on and making it my own.