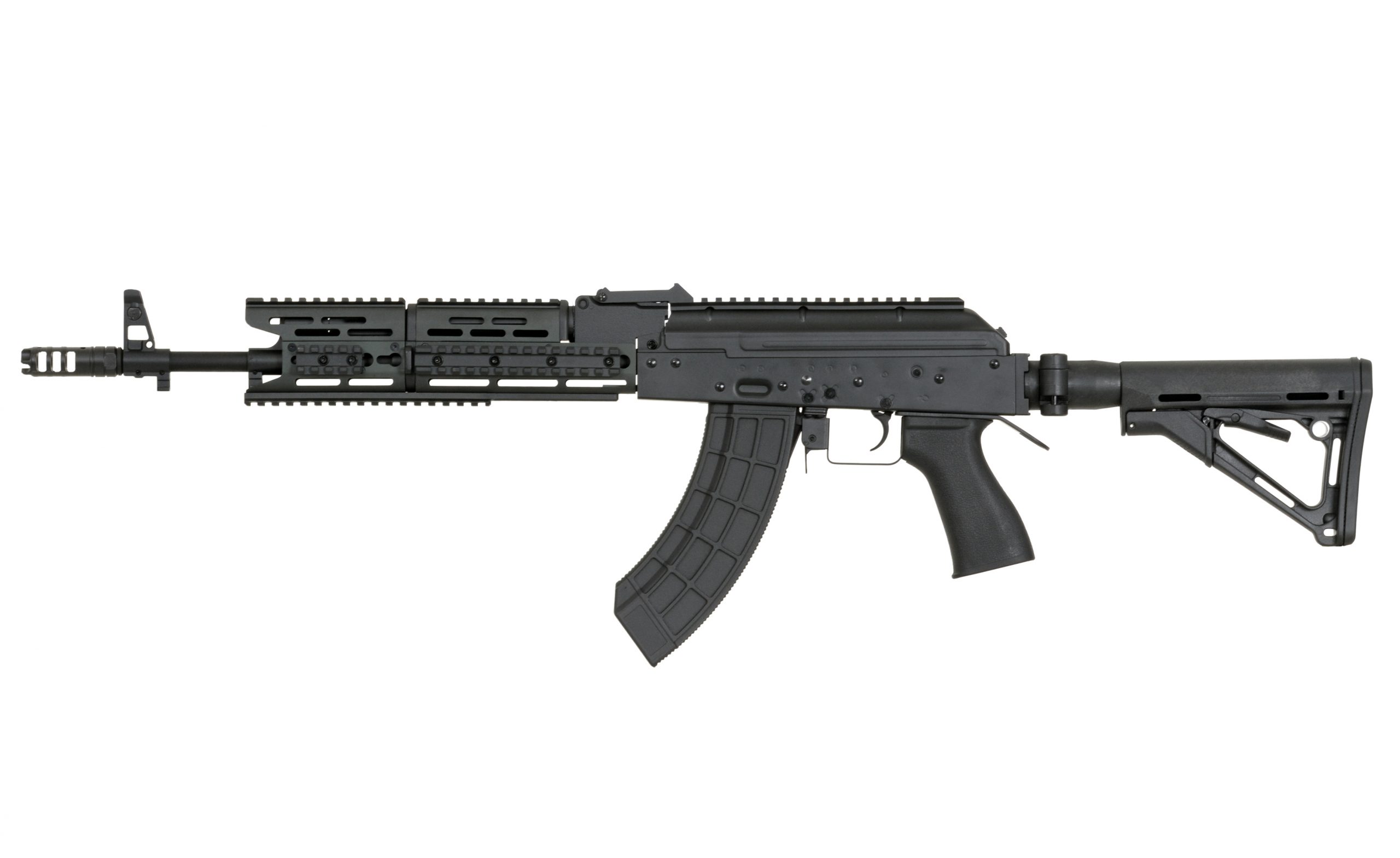 Many years ago, my first intro to airsoft began with a Cyma AK variant, which I imagine is the same case for many of you reading this review. I turned up in my hastily assembled load out, where I was passed a rental AK, a bag of ammo, a bacon sarnie, and a proper Yorkshire brew. The day was a good one. As my experience grew, my kit developed, and my arsenal moved from the cupboard to what is now the ‘Attic of Doom’, I always kept a Cyma rifle in my possession as a cheap go-to backup. For me, along with many, Cyma was the ideal starter gun, cheap, mostly reliable, and actually not bad in terms of performance, and for these reasons alone, I kept one in my kit bag every skirmish, just to keep me in the game for if and when the inevitable malfunction occurred. The reason I mention this is because I believe each brand lends itself to different stages of the airsoft journey, and brands like Cyma have cornered the budget section of the industry well, with a large repertoire of rifles priced within the low hundreds. Cyma are a Chinese manufacturer, best known for their inexpensive Tokyo Marui clones, but in recent years have added new additions to their arsenal, including higher quality AK variant clones of VFC, and other high end manufacturers.

Let’s get straight to the point and talk about the external build quality. This part of the review has left me a little confused, as the build quality for the most of it is actually very good. The vast majority of the rifle is made from either aluminium or steel; in fact the only polymer constructed parts are the pistol grip, and the stock. This then should surely equal a rock solid exterior; capable of living through the torturous mileage we put our gear through on our most favourite day of the month. Typical of Chinese manufacturing, Cyma’s quality have been steadily improving over the years, but these improvements will rarely disguise flaws within the design process, and I feel this rifle has a few flaws in which to talk of, the first of which I noticed when extending the polymer stock, and it became apparent that the buffer tube was slightly loose on its mount. I’m unclear as to whether it had left the factory like this, or perhaps it happened in transit. Secondly, after moving the fire selector a couple of times, the paint behind the detent was swiftly removed. A minor point, but pertinent enough to mention it. Lastly, and by far the largest concern of mine, it’s heavy!

Now when I say it’s heavy, I’m not saying it’s unmanageable, but when it sits at slightly south of 4 kilograms, lugging this thing round for an entire day will surly take its toll. To exacerbate matters slightly, the overall length means the weight sits further away from the body when the rifle is shouldered, making shooting from the upright position more strenuous. This is made a little easier if you retract and fold up the stock, as you can bring the rifle closer to you, but personally I’m not keen on this, and I much prefer to have the rifle shouldered so I can look through my sights with relative consistence. The above point does raise one more question though… how necessary is a folding stock, on a heavy rifle that still measures 740mm when fully folded? In summary, I think that the externals are mostly strong and resilient, but I feel that Cyma have achieved this at a cost, adding weight where it could possibly have been avoided.

Trying not to get too hung up on the weight, let’s cover the aesthetics for a second. From afar, and dressed up with a torch, and an optic of my choosing, I quite like the sinister yet tactical appearance this rifle screams of. It looks mean, and purposeful, and I can understand its appeal. The subtle colour difference and surface finishes between the individual components really sets this rifle off. There’s plenty of rail space to add any number of attachments, and to be honest you’ll definitely need to add an optic or red dot of sorts, as both the front and rear sight are fixed, and serve no real purpose other than to complete the look. As mentioned before, the paint is a little thin on the receiver, and will wear pretty quickly with regular use. This is not something I’m generally concerned with though, as I tend to prefer the weathered look. The side-mounted picatinny rails are keymod fittings, and are easily configurable, and the rifle features both front a rear sling mounts, however the front mount is not overly accessible, and you may have to remove the neighbouring side rail to use it.

Overall, the CM.076 has some draw backs, and I say this hesitantly because in all honesty I really want to like it. Up close and personal it felt cumbersome and unbalanced… but it looks naughty, and apart from the buffer tube which I’ll put down to a transit mishap, it feels sturdy.

Now it was important to manage my expectations at this point, and remembering the price point that the CM.076 sells for, I approached this with an open mind. The first thing to do was to run it through the chrono, so I loaded the 450 round hicap with a handful of 0.20’s and began. I have to report that the rifle was both hot, but relatively consistent, with the first couple of shots hitting 420 feet per second, before settling down to around 390, and rarely deviating by +/- 2 feet per second thereafter. Now before I continue, I need to make a couple of things really clear, as the chrono test left me a little angry. I found the operation of the rifle to be frustrating at best. Each shot felt laboured, and the trigger response severely lacking. This is due to the unnecessary and over-powered spring that causes nothing more than a hot rifle, and undue wear and tear on the internals. In my opinion this is somewhat lazy in terms of design, and to be blunt, I really don’t understand why they are built to this spec. Secondly, and far more importantly, I’m testing a rifle capable of fully automatic fire, which in its current state exceeds 1.3 joules. As of May 2017, this could have serious implications. I’ll leave it at that, but please remember that if you intend to buy this rifle, please ask for it to be downgraded upon purchasing. Remember, stay safe and stay legal guys!

The battery, although not responsible for the slow trigger response, could definitely do with being upgraded. As standard, the rifle is supplied with a 9.6V 1200mAh stick battery. Personally I moved away from Nickel Metal Hydride batteries a long time ago, and moved to Lithium Polymer for their increased performance.

Upon inspection, I found the motor to be of reasonable quality, and given the strength of the magnets, it actually had plenty of torque. This was my first sign of relief, because if I had personally bought the gun my first job would be to downgrade the spring, and I’d be happy in knowing that the trigger response would dramatically improve. Let’s keep going. The gears are sat between 7mm steel bushings, again, sturdy and of good quality, and the gears themselves look beefy and reliable, and comparable to the gear-sets within my personal collection. So far so good. It was a nice surprise to see that the shimming was excellent, which is important in reducing stress on the gears through lateral play, and gear teeth not meshing correctly.

The piston itself is polymer and is fitted with regular piston head, which sits inside an un-ported brass cylinder. As stock components, they clearly work well to provide a good and reliable air seal. Looking back at the chrono test, I put 30 rounds through it on semi-automatic, which yielded 24 readings between 389 and 392. Really not bad at all and quite surprising! One thing to note however, as it sits, this is a fairly high torque setup, and the piston has only one steel tooth. Without downgrading the spring or changing the piston, this could potentially be a recipe for disaster. It was also nice to see bearings on the spring guide, although I would have liked to see them inside the piston too, as I consider one without the other to be ‘half a job’. Again, if this was my personal rifle, I would add bearings where the spring meets the piston, as well as downgrading the spring.

On the whole, the gearbox is actually of sound quality, which I have to say surprised me! It’s easy to think that the over powered spring has ‘spoilt the show’ but in actual fact, if the gun is downgraded upon purchase, this gearbox could be quite something. Not adverse to rolling my sleeves up and getting stuck in there, I would prefer to do this myself, so I could spend time fine tuning the fps to my requirements, as well as installing a mosfet so that I could increase the battery spec, improve the trigger response further, and protect the electronic components. With a little research, I found that a replacement gearbox COMPLETE WITH MOTOR is available for around £55 from the UK, and with the version 3 gearbox being relatively easy to remove, the average player could recover from a catastrophic gearbox failure pretty quickly.

The hop up I’m sad to say I was less impressed with. On the range it failed to hop my 0.28’s as I’d expected, so I switched to 0.25’s which the CM.076 managed a little more successfully. With the hop fully applied, I was able to send rounds down to around the 50 meter mark with relative ease; however the accuracy was hardly something to shout about. Furthermore, it became apparent that the sliding hop dial would move slightly between magazines, as there was little friction to hold it in place. Again, had this been my personal rifle, I would shim the dial to add resistance, as well as installing a rhop to increase range and accuracy. As these are relatively quick and easy fixes, I wouldn’t necessarily let the hop up deter me from buying the rifle. In summary, the accuracy and the range was hardly amazing, but the rifle was definitely still usable, and I imagine could still compete against a lot of the regulars found on the skirmish field.

Ok, at the beginning of this review I said that every brand (or individual rifle) lends itself to a particular area or person, so when trying to summarise I’m really looking to grasp the sort of player the rifle is best suited to. As I mentioned, Cyma as a brand is synonymous with newcomers to this hobby, as a cheap entry level rifle. However, this is where I’m torn, because within Cyma’s own range lies cheaper variants with the same internals, and overall performance. Surely then, those alternatives would make better start-up rifles? It’s heavy and cumbersome, it’s not quite perfect out of the box, and at £218, there’s cheaper options, BUT… the styling has grown on me, the things that aren’t perfect can be fixed relatively easily, and although the price isn’t the cheapest, I wouldn’t actually call it horrendous, especially considering the surprising quality of the gearbox. This then, I believe, appeals to players across the board… from newcomers who want their intro to be a little different, to experienced players who want a project.

Personally, I’m not quite taken enough to consider buying one, but that’s purely down to me and my personal tastes. But during the course of this review the CM.076 has grown on me a little, and I would quite happily take one on as a project to bring the best out of it.